Kamala Harris’ stepdaughter Ella Emhoff was recently captured soaking up the sun on a yacht in St Tropez, France, with her boyfriend Sam Hine. This was just days after the couple attended a glamorous event in Paris. On Tuesday, June 29, 2021, Emhoff was photographed with Hine aboard a charter boat. The two seemed to be very much in love as the paparazzi captured them kissing, cuddling, drinking and taking pictures together.

Dressed in a lime-green bikini, Emhoff completed the outfit with a pair of sunglasses, several necklaces and a blue baseball cap to protect her eyes from the sun. One could also see several tattoos on her arms, legs and torso as she sunbathed. Hine, a senior associate editor at GQ, wore red-and-purple patterned swim shorts and a pair of shades.

The couple was first spotted together in February, which was just weeks after Emhoff appeared at President Joe Biden’s inauguration in a quirky look that turned a lot of heads.

Emhoff and Hine were enjoying on the small charter yacht, which can be reportedly rented for $2,400 a day. As per a report in the DailyMail, the couple might have looked like they were only soaking the sun, but the boat had plenty of luxuries for their benefit. According to its rental website, the Sunseeker, named Papakeecha, has a spacious seating area below deck, a comfortable bedroom, and its own bar. Several staff members can also be seen on-board the boat with the couple.

As per reports, the couple boarded the yacht from the celebrity St Tropez hotspot Club 55. This is a popular hotspot among celebrities and has reportedly been frequented by the likes of Leonardo DiCaprio, Samuel L Jackson, and Princess Diana’s niece Kitty Spencer.

The couple was seen strolling along the dock at the beachfront venue before boarding a dinghy that ferried them out to their yacht and then brought them back to the restaurant at the end of the day.

Ella also managed to do an outfit change before returning to Club 55 – she put on a figure-hugging black dress over her bikini and swapped the cap for a yellow headscarf. She also carried a large leather tote bag from popular brand Telfar, and completed the look with a pair of black Birkenstock sandals on her feet.

Ever since she made an appearance at President Biden’s inauguration, Emhoff has signed a contract with the modeling agency IMG, and made her debut at New York Fashion Week. Shortly afterward, she also graduated from Parsons School of Design. The second daughter also released a debut knitwear collection in February 2021, which had reportedly sold out in minutes. Then she worked on a collaboration with the popular brand Batsheva – it happens to be the same company that designed the dress that she wore to the inauguration under a Miu Miu coat.

The pictures of the couple’s French outing can be seen here.

[ad_1] Coming off of the excitement of Sunday’s Pride celebrations was Rihanna. The Badgal showed off her semi-sheer Fenty Savage lingerie set, which was embroidered… 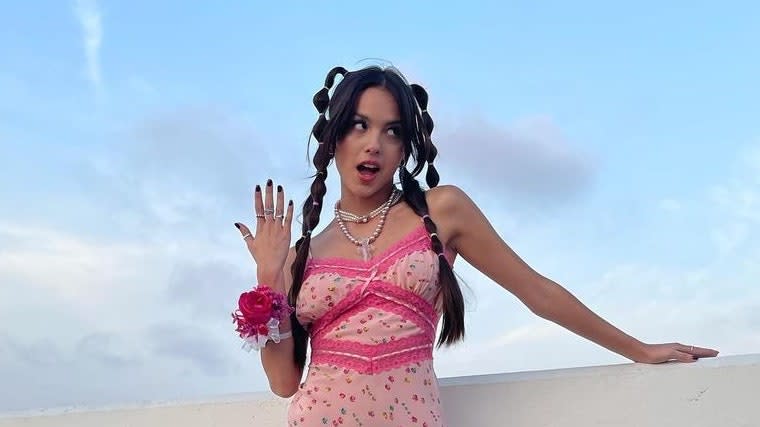 [ad_1] Coming off of the excitement of Sunday’s Pride celebrations was Rihanna. The Badgal showed off her semi-sheer Fenty Savage lingerie set, which was embroidered…

[ad_1] We’re three weeks into fashion month and onto our third destination for Milan Fashion Week. Back in New York City, we saw angsty, smudged…